Mermaids are friends of the Dolphins and guardians of the sea and ocean. They are beautiful women with upper body, dolphins, or fish with the lower body. 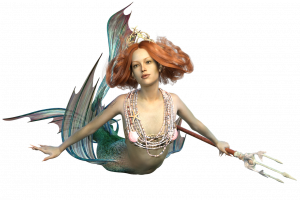 Mermaids have been in myths and folklore since their first appearance in ancient Babylonian stories. They appear in Portuguese, Spanish, Dutch, Scandinavian, British, German, and African myths and legends, as beauties of irresistible appearance and voice, who shared their love with sailors through their songs. Throughout history, the testimonies of various sailors about encounters with the Mermaids have been recorded several times. In the literary culture, we find out about mermaids first in Greek mythology, where Homer mentions them in the Odyssey. The Greek hero Achilles was born of a mermaid, and some Greek families today still claim mermaid blood in their lineage.
During his voyage through the Caribbean Sea, Columbus also had the opportunity to see the Mermaids and said: -“The three mermaids raised their bodies above the surface of the ocean and although they were not as beautiful as the painters depict them on their canvases, their round faces had above all a human appearance!” 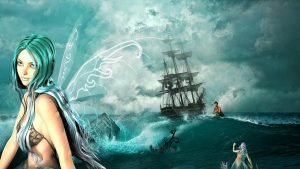