Goddesses are the female form of the Divine – manifestations of the Divine Mother or female Creator of the Universe. In Christianity it is the Virgin Mary, in Hinduism Durga, Parvati, Sarasvati, Kali, Rada, Lakshmi, etc., in Buddhism Tara, Quan jin, etc., in Norse mythology it is Freyja and Frigg, in Egyptian mythology Isis, Hathor, Ishtar, etc. ., in the Greco-Roman mythology of Aphrodite, Artemis, Demeter, Persephone, Athena, etc., and many others in various religions and mythologies.

While the Vedas describe Brahma (the male principle) as the creator of the Universe, ancient prehistoric societies since Paleolithic times (about 25,000 thousand years ago – generally considered the beginning of Western culture) worshiped the Goddess of Nature and Spirituality – the mother parent of the Universe and all that exists.

Greek archaeologist Nicolas Plato, who worked on the excavations of the Minoan civilization of Crete, says: “… this type of social organization lasted until about 3300 years ago. It was a social organization in which whole life was imbued with a faith in Goddess Nature, the source of all creation and harmony.“ 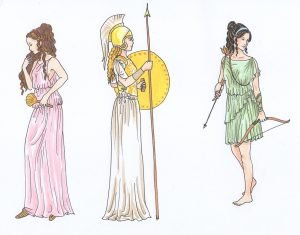 According to Hindu tantric knowledge, Goddess (female aspect of divinity) is represented as knowledge or wisdom (Sanskrit: vidya) and also held as the creator of the Universe and the source of all life.

Dr. David Frawley says: “The three Vedas, the most ancient scriptures of the Hindu tradition – represent the three faculties of speech, mind and breath – and are called Trayi Vidya or the three wisdoms (feminine). The Greek idea of three graces is similar….
The Goddess represents what is hidden, secret, subtle and sensitive.
She represents what has to be searched and discovered.
As the word she represents both the teaching and its comprehension.
She is thus the inner guiding power.
She represents what is to be known.
What we are drawn by an inner fascination to discover.
She is the mystery and allure of higher knowledge which causes us to lose interest in
what the mind can know, the familiar realms of senses.
The Goddess takes us beyond the realm of the known and the domain of time-space into
the secrets of eternity-infinity.

In the process of spiritual learning the Goddess becomes the muse who guides us and inspires us.
She represents the various principles, energies and faculties which make up this great universe, manifest and un-manifest.”

“The goddess says: Before the beginning of the Universe, there was only Me, nothing but me existed.

This self-nature is called by names: consciousness, wisdom and sublime Brahman.”

Rig Veda X 125.7-8 (Vak Ambhrini) states: “My origin is within space waters, in the universal sea. Since then I have been reaching out to all the worlds and touching the edges of the sky. I blow like the wind, setting in motion the entire Universe.

My greatness is spreading far beyond Heaven and this Earth. “

Ivo Andrić says: “A woman stands, like a gate, at the exit as well as at the entrance of this world.